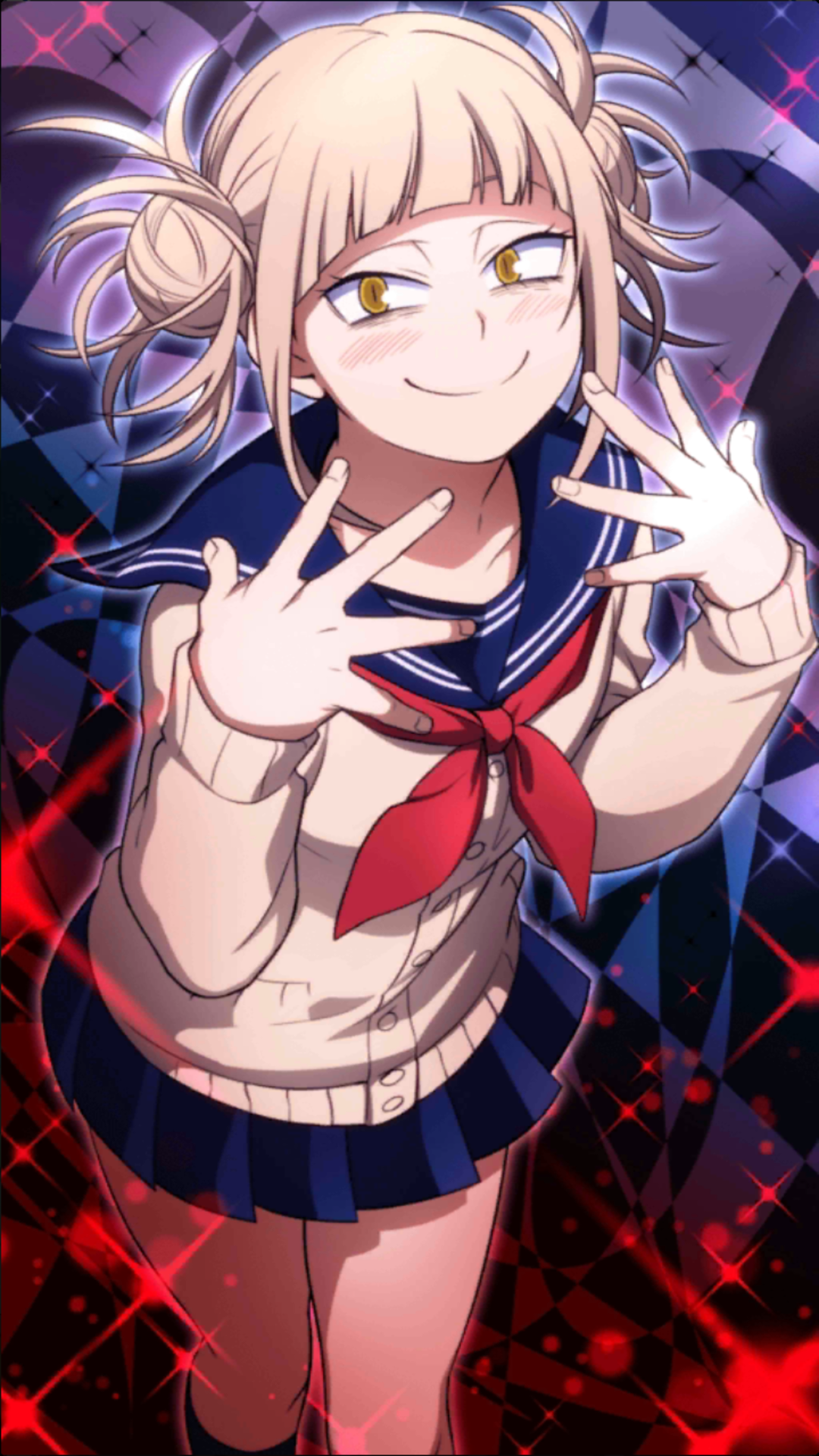 She is a suspect on the run for serial murders involving blood drainage. Like Dabi and Spinner , she was inspired by Stain and his ideology and decided to join the League, which was believed to harbor the Hero Killer's cause.

However, unlike the other two, she is only interested in Stain's ideals, simply because of bloodshed and murder. Himiko is a teenage girl of petite height, she has ash-blonde hair which is tied into two buns with unruly strands of hair poking out of each.

Her eyes are yellow with thin black pupils that somewhat resemble that of a cat. Her most common attire is a seifuku school uniform coupled with a red scarf as well as a dark blue skirt.

Her socks are knee-length and she has a pair of shoes that are commonly worn as a part of a school uniform.

Her villain outfit consists of the same uniform but with additional support gadgets including a large black mask styled with a metallic smile, there are three needle canisters attached to both sides of her mask.

She also has green utility boxes attached with a belt around her waist as well as two on her legs containing blades.

Himiko is very gleeful, jubilant and charismatic. She has an extremely enthusiastic and carefree nature to her, as seen by how she does not mind calling someone she fights as a friend like Ochaco Uraraka and Tsuyu Asui.

Himiko is also highly sadistic and inconsiderate, as she is shown to take pleasure from taking blood from Ochaco in her battle.

She also has a crush on Izuku Midoriya, seeing him as an attractive boy. When she first saw him after his fight with Muscular , she blushed and remarked on his beaten up appearance as something that is extremely attractive to her.

Her crush on Izuku grows into a more obsessive level, where she secretly enters in the Hero License Exam, for the sole purpose of wanting to know more about Izuku.

She was also extremely jolly and ebullient when she met Izuku again once more at the Yakuza hideout, becoming very happy when he remembered her.

In general, Toga has a twisted perspective of love. During her fight with Ochaco Uraraka and Tsuyu Asui, she refers the two as her friends and by their first names, even after their battle, while also trying to kill them at the same time.

When briefly pinned by Ochaco, she talks about the fact that it is natural to love someone so much that anyone literally wants to become exactly like them.

However, it should be noted that her love is not genuine and it is more so an obsession. Ultimately speaking, she wishes to take on the appearances of the people she claims that she loves.

While she is easygoing and happy at most times, she is also surprisingly destructive and violent, as told by her crimes which involves murder and her desire to kill the Hero Killer, even though she admires him.

Even when she was a child, she showed sign of unnatural and chaotic behavior as she devoured on animals and humans, sucking out their blood in order to fulfill her satisfaction.

However, this behavior stems from her quirk, which requires blood to properly use, deeply affecting her psychology.

She also shows a strong hatred for the current society. She views it as a place where she can't be herself, since she was forced to hide her behavior during middle school and eventually snapped.

From that point on, she ran away from home, determined to be herself and do what she pleased. She wishes to create a new society where she'll be free to act how she chooses, and is part of the reason why she joined the League of Villains.

Despite her violent tendencies, she is capable of showing true love and compassion to those around her. She was deeply affected by the loss of Magne, wanting to avenger her comrade's death, and comforted Twice when he was splitting between his two personalities.

Himiko Toga was born in her family as the oldest daughter of out of her siblings. At a very young age, she found a deceased bird covered in blood.

Later wanting to share her joy with her parents and make them happy, she presented the dead bird to them with a bloody smile.

Her parents were upset with her twisted nature. Worried how society would view their daughter and how that would reflect on them as parents, the two subjected Himiko to Quirk reformation where she was forced to suppress her natural instincts and not develop her Quirk.

Since Himiko's admiration of blood was caused by her Quirk and a natural part of who she was, this only caused her instincts to grow.

In middle school, she was considered to be a very bright and friendly girl by her classmates and teachers until she was found drinking the blood of a boy named Saito that she fell "in love" with.

Everyone looked at her with nothing but horror and disgust and as a result, she ran away from her middle school graduation. Since then, she has been on the constant run from the law and became a suspect of a series of serial blood loss cases.

Himiko Toga was one of the few villains gathering together to the League of Villains, once Stain and his ideology were made public to the media.

Himiko first appeared at Tomura Shigaraki 's base with Dabi as new recruits for the League of Villains. Here Toga expresses her psychotic desire to become like Stain and kill him.

Tomura was not impressed by their praise of the Hero Killer, and tried to attack them out of spite, but his and their attacks were deflected by Kurogiri.

Despite the hostile encounter, Tomura accepted them both into the League of Villains. Himiko later appeared with a few other villains in the Vanguard Action Squad.

Their objectives were to attack the Yuuei students at the camp while they trained. During the attack, Himiko encountered Ochaco and Asui.

She had a device that was being used to take blood from her targets. As the fight continued, Himiko held a conversation with Ochaco about a crush that she had.

As the confrontation continued, Himiko retreated in the woods as the other U. As she left the scene, she glanced at Izuku in his beaten up appearance from Muscular and blushed.

She made it to the exit point of the forest where she waited for a villain to bring Katsuki Bakugou with them. Kurogiri appeared and he was able to help the members of the Vanguard Action Squad retreat from the scene and capture Katsuki.

Himiko, alongside the rest of the league, kept Katsuki under them intending to make him join the League of Villains.

With the help of the heroes and the U. A students, they were able to retrieve Katsuki from the villains. All For One also transported the villains out of the way to deal with All Might.

After All For One's defeat, the League of Villains scattered all over the place, in order to stay hidden from the police.

A students during the Hero License Exam. From there, she encountered Izuku Midoriya and attempted to capture his blood, while also wanting to know more about him.